It has been a long time since I have read the first installment of this series. Nearly 6 years to be exact. As I looked through my bookshelf for my next read, I realized that I had not read the final book, titled Finale. So, I figured it would only be fitting that I share my review on the series all together. 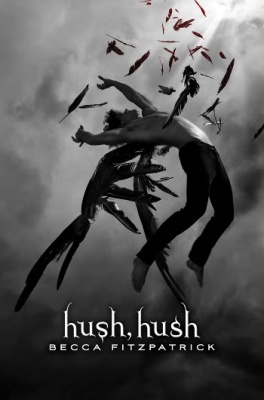 For Nora Grey, romance was not part of the plan. At least, not until Patch came along. With his easy smile and probing eyes, Nora is drawn to him against her better judgment. But after a series of terrifying encounters, Nora’s not sure who to trust—she can’t decide whether she should fall into Patch’s arms or run and hide from him. And when she tries to seek some answers, she finds herself near a truth more unsettling than any feeling Patch evokes. For Nora stands amid an ancient battle between the immortal and those who have fallen—and choosing the wrong side will cost her life.

The first book was an instant cover crush. I remember walking through Barnes and Noble and spotting this and not caring what the synopsis said. I knew I had to have this gorgeous book. Luckily, this cover crush didn’t fail me because the book was great! The writing, amazing! Character development keeps you sucked in and the action was so exciting! I was hooked! The excitement was nonstop for me and left me yearning for more. This book gets a 5/5 stars.

Despite starting a relationship with Patch, her guardian angel (whose title is the only angelic thing about him), and surviving an attempt on her life, things are not looking good for Nora Grey. Aside from fearing her boyfriend is interested in her nemesis, Nora is haunted by images of her father and becomes obsessed with understanding his disappearance. As Nora delves into the mystery of her father’s death, she begins to wonder whether her Nephilim blood line has something to do with it. And since Patch isn’t answering her questions, Nora has to start finding the answers on her own. Relying too heavily on the fact that she has a guardian angel puts Nora at risk again and again. But can she really count on Patch—or is he hiding secrets darker than she can even imagine?

Here we have the sequel, Crescendo. Things get tricky with Nora and Patch’s relationship as Patch seems to be hiding things about her father and what the future may hold for her and what being Nephilim really means. It doesn’t look like Nora can count on him and when she searches for answers on her own, things gets dirty. This book was also an exciting read until then end. It also gets a 5/5 stars.

Nora Grey can’t remember the past five months of her life. After the initial shock of waking up in a cemetery and being told that she has been inexplicably missing for weeks, she tries to get her life back on track. So she goes to school, hangs with her best friend, Vee, and dodges her mom’s creepy new boyfriend.

But there is this voice in the back of her head, an idea that she can almost reach out and touch. Visions of angel wings and unearthly creatures that have nothing to do with the life she knows. And an unshakable feeling that a part of her is missing.

Then Nora crosses paths with a sexy stranger, with whom she feels a mesmerizing connection. He seems to hold all the answers…and her heart. Every minute she spends with him feels more and more intense until she realizes she could be falling in love. Again.

The third installment starts with Nora trying to lead a normal life, all while trying to figure out why she can’t recall the last five months. She tries to make sense of the strange visions she continues to have. While this book was pretty good, it really got slow towards the end. I can’t say much more than that without throwing some spoilers in. I give this one a 3/5 stars. 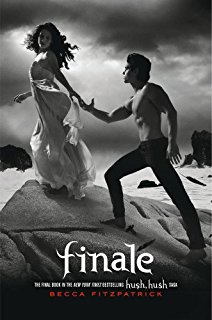 Nora is more certain than ever that she is in love with Patch. Fallen angel or no, he is the one for her. Her heritage and destiny may mean they are fated to be enemies, but there is no turning her back on him. Now Nora and Patch must gather their strength to face one last, perilous trial. Old enemies return, new enemies are made, and a friend’s ultimate betrayal threatens the peace Patch and Nora so desperately want. The battle lines are drawn—but which sides are they on? And in the end, are there some obstacles even love can’t conquer?

And here we have the conclusion of the series. I honestly don’t even know where to begin. This book was so difficult to get through. Now, I did have quite a gap between reading the third and fourth book, but I felt myself getting back into Nora and Patch’s world after the first chapter. There was a point in the book that got a bit exciting but the story began to lag towards the end and felt like it rushed to a close. I think this series could have been great in two books. I fell into a bit of a reading drought after putting this one down. Now that I’ve completely shaken this series off, I’m ready to jump into a good read! As for the rating, I give this a 2/5 stars.

Note** All blurbs taken from Amazon.com

View all posts by Stephanie Cardozo